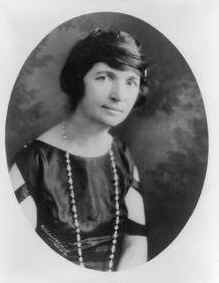 Founder of Planned Parenthood, the largest abortion provider in the world.

Her goal in life:
Sanger admitted her entire life’s purpose was to promote birth control. An Autobiography, p. 194

Helped to establish the research bureau that financed „the pill,“ she contributed toward the work of the German doctor who developed the IUD. „Ernst Graefenberg and His Ring,“ Mt. Sinai Journal of Medicine, July-Aug. 1975, p. 345, in Margaret Sanger: Father of Modern Society, by Elasah Drogin

Sanger espoused the thinking of eugenicists — similar to Darwin’s „survival of the fittest“ — but related the concept to human society, saying the genetic makeup of the poor, and minorities, for example, was inferior. Pivot of Civilization, by Margaret Sanger, 1922, p. 80

On mandatory sterilization of the poor:
One of Sanger’s greatest influences, sexologist/eugenicist Dr. Havelock Ellis (with whom she had an affair, leading to her divorce from her first husband), urged mandatory sterilization of the poor as a prerequisite to receiving any public aid. The Problem of Race Regeneration, by Havelock Ellis, p. 65, in Margaret Sanger: Father of Modern Society, p. 18. Ellis believed that any sex was acceptable, as long as it hurt no one. The Sage of Sex, A Life of Havelock Ellis, by Arthur Calder-Marshall, p. 88

On eradicating ‚bad stocks‘:
The goal of eugenicists is „to prevent the multiplication of bad stocks,“ wrote Dr. Ernst Rudin in the April 1933 Birth Control Review (of which Sanger was editor). Another article exhorted Americans to „restrict the propagation of those physically, mentally and socially inadequate.“

On blacks, immigrants and indigents:
„…human weeds,‘ ‚reckless breeders,‘ ’spawning… human beings who never should have been born.“  Margaret Sanger, Pivot of Civilization, referring to immigrants and poor people

On sterilization & racial purification:
Sanger believed that, for the purpose of racial „purification,“ couples should be rewarded who chose sterilization. Birth Control in America, The Career of Margaret Sanger, by David Kennedy, p. 117, quoting a 1923 Sanger speech.

On the right of married couples to bear children:
Couples should be required to submit applications to have a child, she wrote in her „Plan for Peace.“ Birth Control Review, April 1932

On the purpose of birth control:
The purpose in promoting birth control was „to create a race of thoroughbreds,“ she wrote in the Birth Control Review, Nov. 1921 (p. 2)

On the rights of the handicapped and mentally ill, and racial minorities:
„More children from the fit, less from the unfit — that is the chief aim of birth control.“ Birth Control Review, May 1919, p. 12

On religious convictions regarding sex outside of marriage:
„This book aims to answer the needs expressed in thousands on thousands of letters to me in

the solution of marriage problems… Knowledge of sex truths frankly and plainly presented cannot possibly injure healthy, normal, young minds. Concealment, suppression, futile attempts to veil the unveilable – these work injury, as they seldom succeed and only render those who indulge in them ridiculous. For myself, I have full confidence in the cleanliness, the open-mindedness, the promise of the younger generation.“ Margaret Sanger, Happiness in Marriage (Bretano’s, New York, 1927)

On the extermination of blacks:
„We do not want word to go out that we want to exterminate the Negro population,“ she said, „if it ever occurs to any of their more rebellious members.“ Woman’s Body, Woman’s Right: A Social History of Birth Control in America, by Linda Gordon

On respecting the rights of the mentally ill:
In her „Plan for Peace,“ Sanger outlined her strategy for eradication of those she deemed „feebleminded.“ Among the steps included in her evil scheme were immigration restrictions; compulsory sterilization; segregation to a lifetime of farm work; etc. Birth Control Review, April 1932, p. 107

On adultery:
A woman’s physical satisfaction was more important than any marriage vow, Sanger believed. Birth Control in America, p. 11

On marital sex:
„The marriage bed is the most degenerating influence in the social order,“ Sanger said. (p. 23) [Quite the opposite of God’s view on the matter: „Marriage is honorable in all, and the bed undefiled; but whoremongers and adulterers God will judge.“ (Hebrews 13:4)

On abortion:
„Criminal‘ abortions arise from a perverted sex relationship under the stress of economic necessity, and their greatest frequency is among married women.“ The Woman Rebel – No Gods, No Masters, May 1914, Vol. 1, No. 3.

On the Catholic Church’s view of contraception:
„…enforce SUBJUGATION by TURNING WOMAN INTO A MERE INCUBATOR.“ The Woman Rebel – No Gods, No Masters, May 1914, Vol. 1, No. 3.

On motherhood:
„I cannot refrain from saying that women must come to recognize there is some function of womanhood other than being a child-bearing machine.“ What Every Girl Should Know, by Margaret Sanger (Max Maisel, Publisher, 1915) [Jesus said: „Daughters of Jerusalem, weep… for your children. For, behold, the days are coming, in which they shall say, Blessed (happy) are the barren, and the wombs that never bare, and the breasts which never gave suck.“ (Luke 23:24)]

„The most merciful thing that a large family does to one of its infant members is to kill it.“ Margaret Sanger, Women and the New Race (Eugenics Publ. Co., 1920, 1923)

This site uses Akismet to reduce spam. Learn how your comment data is processed.